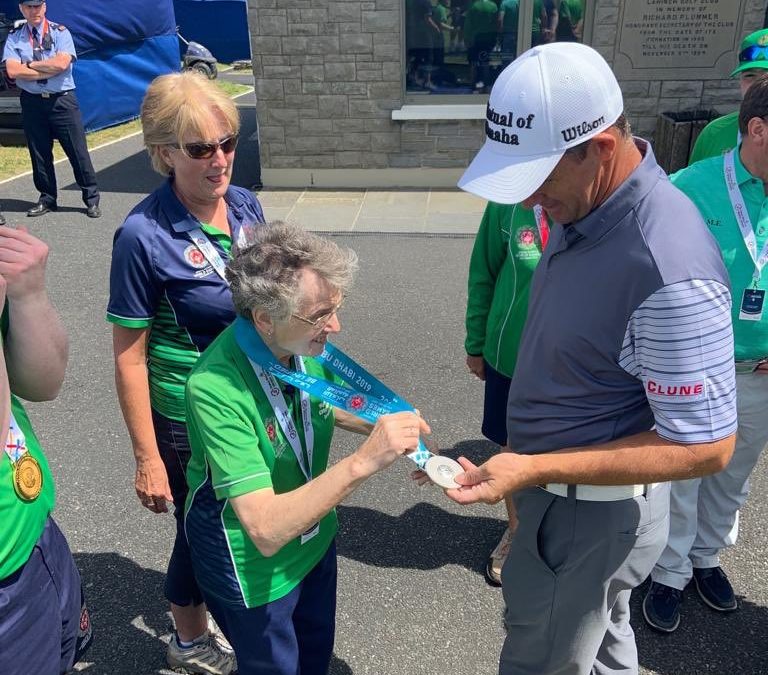 It was a busy summer for the Special Olympics Ireland World Summer Games golfers as they were invited to both the Irish Open in Lahinch and The Open in Portrush.

Team Ireland Gold medallists John Keating and Mark Claffey, both from Dublin were joined by teammates Mairead Moroney (Co. Clare) and Simon Lowry (Co. Galway) in Lahinch as they received a rapturous applause from the packed stands. Introduced by Paul McGinley, their achievements in Abu Dhabi were called out to the crowds and each athlete introduced one by one.

Earlier in the morning they caught up with Special Olympics Global Ambassador Padraig Harrington who had taken time out with the Team Ireland golf squad to provide some hints and tips ahead of their unforgettable journey to Abu Dhabi in March.

Dubliner, Mark Claffey and Jill Connery from Co. Armagh then travelled to Portrush where they enjoyed watching some of the biggest names in golf on the final practice day on Wednesday 17th July.
Claffey is no stranger to the limelight following his international gold medal success; the Dubliner captured hearts across Ireland and beyond during the World Games when a video of the moment he found out he won Gold went viral. During his visit to The Open, he was back online to send a special good luck message to his hero, Shane Lowry, as he made his final preparations to compete in the historic tournament.
In a video message published on the Special Olympics Ulster Facebook and Twitter feeds, golf gold medallist, Claffey, joined by Team Ireland teammate Jill Connery predicted that Lowry would take home the Claret jug: “I think my favourite guy; my best friend, Shane Lowry will win The Open; try your best Shane Lowry, I love you so much, I know you’ll try your best; do it for me, I know you can do it!”
Commenting after the event, Emma McMenamin, head of delegation for Team Ireland said: “It was fantastic for our athletes to be invited to The Open, and to see the best in the world competing at this level. Having travelled to Abu Dhabi to represent Ireland at the Special Olympics World Games, they are just coming back down to earth; representing your country is the biggest honour for any sportsperson and it was a great experience to be at The Open for this historic moment for golf in Northern Ireland.
“This is a huge golfing nation and to see The Open return here for the first time, and to see these big names in action on home turf, has been hugely inspiring to all of our athletes.
“Golf is large and growing sport for Special Olympics in Ireland; buoyed by the profile the sport has gained in recent years, through the success of golfers such as Harrington, Lowry, McIlroy, Clarke and McDowell. Our athletes have made a big impression on and off the course in recent years, and as well as the opportunity to compete on a regional, national and international level, Special Olympics is promoting inclusion in sport and social inclusion particularly; giving our athletes a chance to make new friends, gain confidence and improve their social skills.”
Team Ireland golfers and results.
They returned with: 4 gold, 1 silver and 1 x 4th placement ribbon.