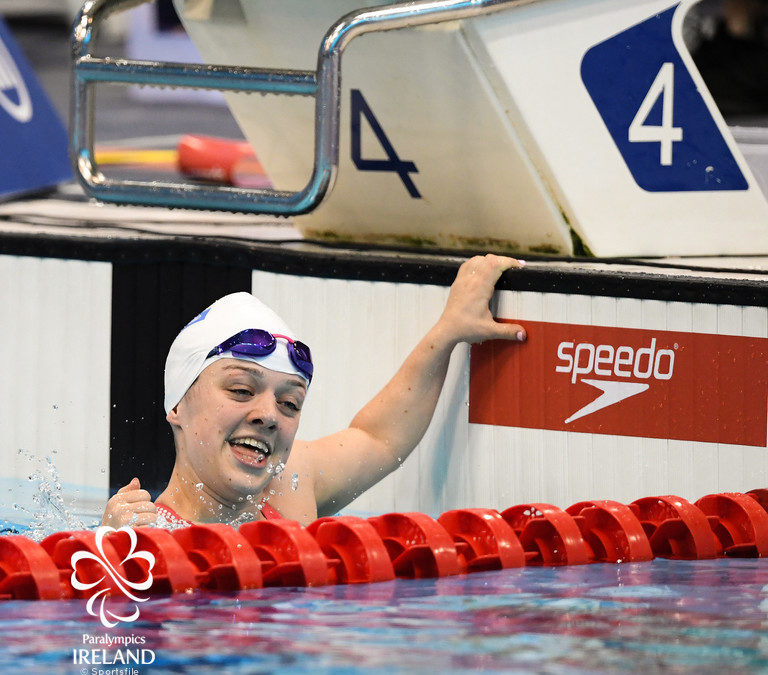 Nicole burst on to the scene in 2015 when she qualified and competed at the 2015 IPC World Para Swimming Championships. Nicole qualified through to 6 finals out of her 6 events as a 13 year old. During Nicole’s 2016 Rio Paralympic Games qualification campaign, Nicole competed at the IPC European Open Championships in Madeira and won two bronze and one silver medal in the S6 50m Butterfly, SM6 200m IM and SB6 100m Breaststroke respectively. She went on to compete at her first Paralympic Games at the age of 14, qualifying through to 5 finals and remarkably finishing 5th in the S6 50m Butterfly. The Allianz European Para Swimming Championships held in Dublin in 2018 was Nicole’s first major competition since Rio and she produced a gutsy final swim to snatch the silver medal from her Ukrainian opposition who had previously medalled in Rio. Nicole remained ranked 2nd in the World until this year’s 2019 London World Para Swimming Championships which saw her produce another massive personal best which earned her bronze on this occasion. She currently trains on the Irish National Sports Campus with the local NAC Swimming Club under Ireland’s most decorated Paralympic Swimmer, coach Dave Malone. Nicole heads towards 2020 as the 3rd fastest ranked S6 50m Butterfly swimmer chasing down her two biggest rivals.

1. What’s your first memory of sport as a child?

My first memory of sport as a child is being involved in anything and everything such as swimming athletics and team sports.

2. How did you first become involved in sport?

I became in involved in sport firstly because I was born with a disability called hypochondroplasia which is a form of dwarfism and my parents didn’t want to treat me any differently so they got me involved in sport just like they did with my brothers.

3. What sports did you try as a child?

I tried swimming and athletics but then when I was about eight years old, I got into a bit of Gaelic football for a while but decided that wasn’t a road I wanted to go down.

4. What decided you to settle on your chosen sport?

I decided to stick to swimming because it was the one I was very good at and the one I mostly enjoyed.

5. Who has had the most impact on your sporting career?

I would have to say that my parents have had the most impact on my career, from the age of five they have encouraged me to follow my dream taking me to and from the pool every day and most of all telling me my dreams would come true if I put in the effort and now they have.

6. What female do you most admire in the world of sport?

My biggest admiration in the world of sport is Ellie Simmonds. I have looked up to Ellie since I started swimming, from watching her compete at the Paralympics in Beijing and London and then finally getting to race against her at the 2016 Paralympic Games. All them years ago I said to myself I wanted to be like her one day and my dream finally became a reality in 2016. I do race against Ellie now but she is still the most inspiring person I see in sport because of how far she has come in her career.

7. Outside of sport what do you do in your leisure time?

People think in an athlete’s life when they are not training, they would want to go out all the time but to be honest when I’m not swimming I really like to relax and get my energy levels back up but I would normally hang around with my friends or go out for dinner or go to the cinema.

8. What is the last movie you went to see? What is your favourite movie of all time?

The last movie I went to see was actually with the Irish team on our training camp in Dublin preparing for the world championships and that was called “Good Boys” and my favourite movie of all time would have to be Marley & Me, yes it is a sad movie but it would have to be my favourite one.

9. What music do you listen to?

I like any sort of music that is in the charts really or anything that is on the radio. I do like a bit of picture and Lewis Capaldi when I just want to relax and have my own space.

10. Are you a reading fan? If so what are you currently reading?

I am not actually into reading I liked English at school however sitting down reading a book was not something I really enjoyed I just got bored and restless half way through or would forget what was happening in the story when I went to pick it back up again.

11. Do you follow any sports stars on social media? If so who?

I would follow some sports stars on social media but it would be more from para sport such as Jessica Long and Ellie Simmonds and other para swimmers.

12. Forget about your sporting diet for a moment? Your favourite meal when you breakout?

13. Who do you most admire in your own sport?

14. Do you have a special ritual before competing?

I’m not one who would listen to music in the call room or anything like that but my normal ritual before my race would obviously be my warm up but right before my race I would swing my arms and do a few jumps and then just before getting on the block I like to call it my little dance of jumping up and down and twisting and turning.

15. Do you still play other sports for fun?

No I actually don’t play any other sports as with being a swimmer it means I’m in the pool 14 hours a week and 3 gym sessions on top of that so I don’t really get the time to do any other sports, Sunday is my only day off and all I want to do is relax and catch up with some friends.

16. What advice would you give to young girls & boys to encourage them to participate in sport?

The advice I would give to young people is whatever dreams they have tell them to keep chasing them and that their dreams do come true one day, maybe not right away but if you keep working hard at something you love you will get the outcome you want at the end of it and don’t let anybody tell you that your dreams or not possible or they will not happen because eventually they will.

17. What has been your biggest sporting achievement?

My biggest sporting achievement so far has to be winning my first ever world bronze medal in London of this year (2019). Sport shouldn’t be all about winning medals but this medal meant so much for myself, my family and my coaches.

I am lucky enough that I have only ever had one injury in my swimming career and that was in 2017 when I tore my groin at a competition in the summer but lucky for me I had so much support during the recovery that it was not a very big year so it didn’t set me back that far, I just had to deal with it and do everything I could and take all the advice about recovering from it as fast as possible. Setbacks are unfortunate in sport but it happens to everyone and you just have to get on with it there in nothing you can do to change something that has already happened so you have to be patient and it will all work out in the end.

19. What do your family make of your success?

My family are extremely proud of me and they play such a big part in my career such as my mam gave up her career just so she could drive me to and from swimming every day, make me my dinner and bring it in the car for me and then at weekends my dad would take over and take me swimming and my brothers are so understanding and considerate of that they just accept they never give out that they don’t see my parents all the time and they will step in and look after themselves.

Sport means everything to me and I can’t stress that enough, I am currently taking a year out of school so that I can prioritize my swimming and not have any other distractions, I have loved sport from such a young age and to finally be winning world and European medals I just want to keep going to eventually win a Paralympic medal. Sport doesn’t last forever so I enjoy every minute of it while I can and I would not be where I am today without my sport. It has brought me so many friendships and so much education about everything around it and it just makes me so happy you do have your bad days but they just make your good days even better.